The Serra do Caldeirão supports a wealthy community of woodland passerines and birds of prey, comprising about 150 species that include raptors such as the Short-toed Eagle, the Goshawk, the Sparrowhawk, and the Eagle Owl; in winter and during the migratory interludes, species like the Griffon Vulture also show up in the area. Notable passerines occurring here during breeding season include a variety of warblers – like the Moustached Grass-Warbler, the Subalpine Warbler and the Western Orphean Warbler – as well as Wryneck, Black-eared Wheatear, Iberian Chiffchaff, Red-rumped Swallow, Woodchat Shrike and Bee-eater. Dartford Warbler, Rock Bunting, and Blue Rock-thrush (scarcer) can be found year-round. The Golden Oriole is also much more common in the countryside than along Algarve’s coast – this flashy bird prefers to dwell in rural areas, mixed forests and wooded river valleys. Wintering species include Dunnock, Ring Ouzel and Bullfinch.

The Algarve also shelters one of the most important populations of Bonelli’s Eagle in Portugal, a regionally endangered species that occurs mainly throughout the inland ‘Serras’ – however, despite the low numbers, this large and beautiful raptor should be relatively easy to detect throughout the region’s mountainous chains. Contrary to other places in Algarve, in the Serras there is not a ‘birding hotspot’ where birds occur in relatively large concentrations; Barranco das Lajes and the neighbouring peaks and valleys are as good as any other place to observe most of the birds mentioned above. Other good spots to observe inland species include Barranco do Velho and Parises, as well as Rocha da Pena and Fonte da Benémola (in Loulé), the Lower Guadiana Valley (in eastern Algarve) and Picota in Monchique. 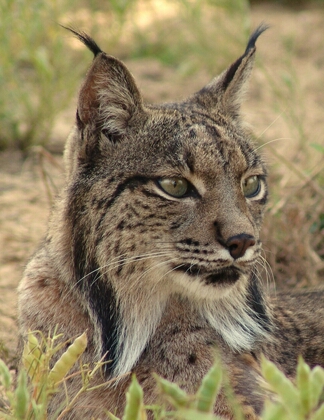 The Iberian Lynx (Lynx pardinus) is the world’s most threatened species of cat. You won’t see it in Barranco das Lajes (let us know if you see one!), but the species is being slowly and carefully reintroduced in the wild by Portuguese and Spanish authorities. The Serra is a perfect example of the habitat favoured by this very agile and mainly nocturnal animal. The Iberian Lynx feeds on wild rabbits, partridges, rodents and deer; its population suffered a sharp decline in the last century due to the diseases – namely myxomatosis – that affected the native populations of rabbits. Habitat degradation also played an important role. In the Algarve, the Lynx has to face competition from the Mongoose, the Wildcat and the Fox, which are common throughout the Serras. The Iberian Lynx has a bright yellowish to tawny colored spotted fur and a chiseled head with tufted ears and long facial whiskers. Males can reach 82 cm (32.3 in) in length and weigh a maximum of 16 kg (35 lb). Males are larger than females. Image: Programa de Conservación Ex-situ del Lince Ibérico
Featured Plants | Serra do Caldeirão
The Wild Iberian Peony (Paeonia broteri) is a beautiful perennial species of peony depicted on the main image above. In its home range, this peony blossoms from late March to early May. It grows in pastures, rocky terrain, meadows, and in the undergrowth of pine and oak forests at an altitude between 300 and 1800 meters. It prefers humid places. This is an endemic species of the Iberian Peninsula that bears large rose-pink or magenta flowers – about 12 cm wide – and glossy green leaves. Each flower bears five or six showy petals and contrasting yellow anthers. The plant reaches up to 40 cm (16 in) in height, but some specimens may be double that height. Its common name in Portugal is ‘rosa-albardeira’.