Search
Like a commanding sentinel guarding the frontier between the Barrocal foothills and the rugged Serra upland, the ‘geologic monument’ of Rocha da Pena offers a quite picturesque and compelling hiking route deep in the Algarve countryside. Such transitional location – and the outstanding geological features of the place – make this vigorous rock cornice one of the most botanically diverse spots in southwest Iberia. 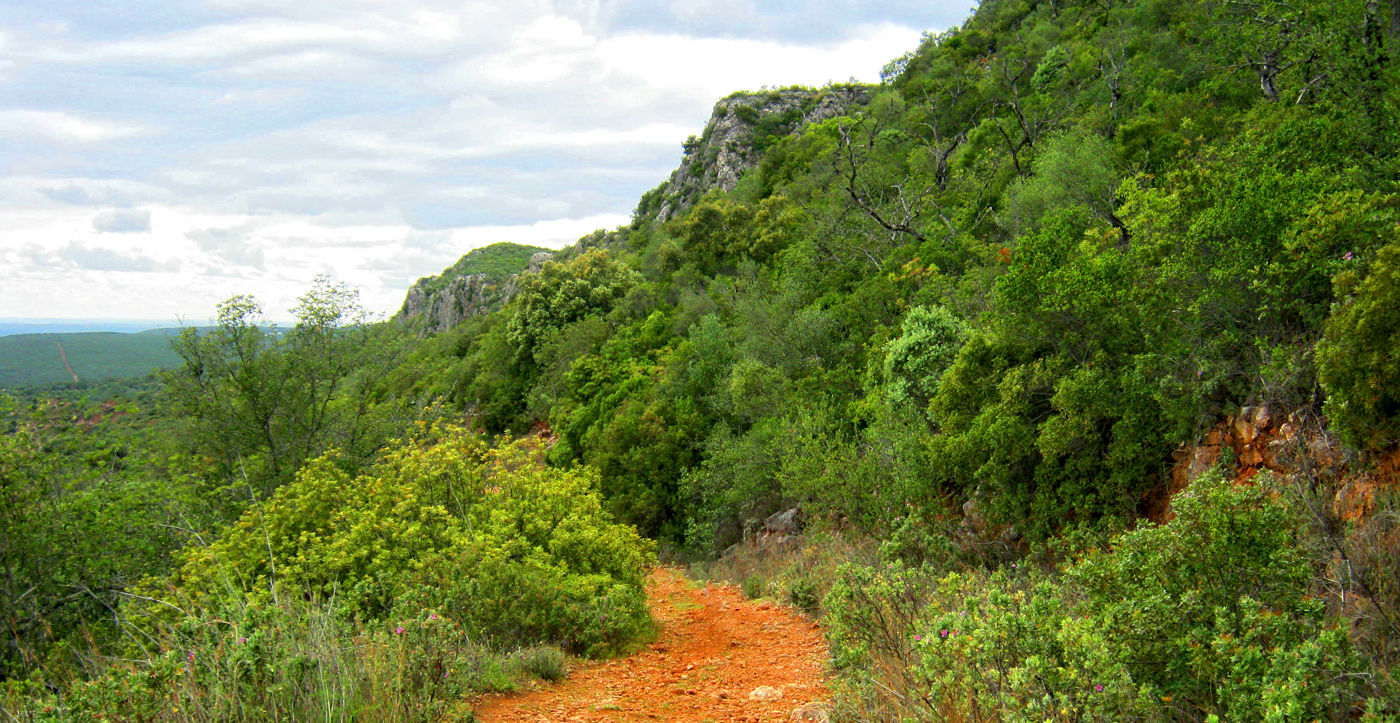 Its sheer north face, much shadier and wetter, is formed by acidic shale bedrock; there you´ll find species like the Bay Laurel, the Cork Oak, the Poplar-leaved Rockrose (Cistus populifolius) and the exuberant Portuguese Heath (Erica lusitanica). This results in a stark contrast to the always sunny and dry south face, whose soil is strongly alkaline due to the presence of very hard limestone bedrock. And finally, there is the peculiarly fertile terra rossa (‘red earth’) higher plateau, an arid place with no shadows and no water, despite being subjected to strong and humid winter winds.

Those three very distinct ecological niches led to the emergence of a high degree of floral biodiversity; in truth, there are a staggering 450 different species of plants inhabiting this predominantly calcareous outcrop, and maybe you will be able to spot some of the rarest ones as soon as you reach the 1.2 mile long table-top. Most notable of all are the native daffodils, peonies (Paeonia broteroi) and orchids from the genus Ophrys, the so-called ‘bee orchids’ (please check here their flowering months). To observe these wildflowers you’ll have to visit Rocha da Pena between early January – the best month to see the very rare and threatened Narcissus calcicola, a daffodil endemic to Portugal – and late April. The strikingly yellow clusters of daffodils or orchids can be encountered throughout the plateau. But first you’ll have to negotiate a fairly steep eastward uphill hike at the start of the route, by following a trail where rainfed orchards and olive groves are gradually replaced by aromatic Mediterranean scrubland comprised of several species of lavender, thyme and rosemary. 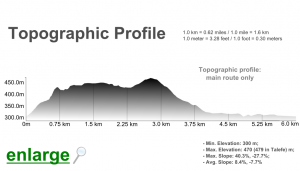 Being attentive to the trees and the dense undergrowth provides good chances to observe birds like the Sardinian and Dartford Warblers, as well as Blue Rock-thrushes and Iberian Green Woodpeckers (Picus sharpei). Contrary to other places in Algarve, birdlife is not especially abundant, despite being varied and seasonally interesting. If you’re visiting in summer, you’ll certainly encounter the Bee-eater (Merops apiaster), a colourful bird that uses the cliffs for nesting; winter, in turn, marks the arrival of passerines like the Ring Ouzel (Turdus torquatus) and the Alpine Accentor (Prunella collaris). However, it is during the autumnal migration that the most striking visitors will be spotted surfing the hot thermals generated by the vertical rock faces. These include the Booted Eagle (Aquila pennata / Hieraaetus pennatus), the Short-toed Snake-eagle (Circaetus gallicus) and sometimes, the Griffon Vulture (Gyps fulvus). Much, much rarer, are the Egyptian Vulture (Neophron percnopterus), the Eurasian Hobby (Falco subbuteo) and the Bonelli’s Eagle (Aquila fasciatus). More frequent birds of prey are the impressive, nocturnal, and seldom spotted Eurasian Eagle-owl (Bubo bubo), and the Common Buzzard (Buteo buteo) which inhabits the surroundings throughout the year.

Reaching the top, you can then follow a short and craggy side route to reach the north-facing cliff edge. From there, you’ll enjoy a great panoramic view of the Algarvian upland terrain. Make your way back, and proceed through the highly uneven hiking route, roughly parallel to the south-facing cliff edge. You will then observe an archaic stone-by-stone defensive wall dating back from the Iron Age. Archaeological evidence assign its construction to the Celtiberians, the Celtic people that lived in Iberia in pre-Roman times (6th century BC – 1st century BC). According to legend, the desperate Almohad Moors also used Rocha da Pena has a final defensive refuge against the Portuguese troops led by King Afonso III (13th century). That is why the largest cave in Rocha da Pena is named ‘Moors Grotto’ (‘Algar dos Mouros’): supposedly, the last Islamic defenders tried to hide themselves inside the hefty cave before being slaughtered by the Christian hordes. Nowadays, only two locally endangered species of bats occupy this cave, the Lesser Mouse-eared Bat (Mysotis blythii) and the Bent-wing Bat (Miniopterus schreibersii).

For the Moors under siege the problem was the absolute lack of water sources: being a karstic landform, Rocha da Pena has a highly porous and slightly soluble carbonated rock substratum. Millions of years of erosion and dissolution led to the development of a vast subterranean drainage system consisting of deep sinkholes, grottoes, and caves. Rocha da Pena is a largely hollow cornice, and no water stays on the surface. It also originated idiosyncratic terrain features – called ‘karren fields’ or ‘lapiez‘ – comprising runnels, flutes, grykes and clints. These features are the reason behind the cragginess and unevenness of the hiking route. Just before the start of the way down, there is another side route that will take you to the ‘Talefe’ – a folk name equivalent to ‘trig point’ – corresponding to the highest summit in Rocha da Pena, measured at 479 metres (1572 feet). From there, it is possible to glimpse the distant scintillating ocean, and to clearly observe the typical Barrocal landscape. From the Talefe viewing point the path winds its way downwards to the quaint village of Penina. In the whitewashed hamlet, just follow the signs in order to intersect the main trail again. Before reaching the initial starting point, the route will take you through Alamo Valley, a rural area under the imposing presence of the south face.

FURTHER TIPS
Seen from afar, Rocha da Pena has an unmistakable shape. However, to actually get to the place where the walking route starts you’ll have to pursue a few secondary roads when nearing your destination. Please verify directions on the Google Map above by checking the markers. The trail starts just beside an existing coffee house called ‘Café das Grutas’. Steep but fairly smooth at the start, the trail then gets very rocky, winding and narrowing across the plateau; moreover, the existing reddish clay topsoil becomes very slippery whenever it rains. Hikers really need proper footwear – preferably, sturdy and waterproof – when visiting Rocha da Pena between October and early May. Also, do not walk near the edge of the cliffs – leave it to the almost always present enthusiast rock climbers – and take plenty of water, as well as something to eat. Depicted in the karstic rocks (lapiez), route markings are generally clear but you have to look down in order to spot them. One notable exception occurs along the side route that takes you to the north face viewing point, where signs are rather inconspicuous. It is quite easy to retrace your steps after such a short walk, though. Following the descent from the plateau, do not take the asphalt road when leaving the village of Penina. You won´t reach the starting point unless you proceed along the gravelled route across Alamo valley. Enjoy!