Search
Wideness, flatness and quietness: magnified by the graceful flight of a lonely Montagu’s Harrier, these are the prevailing feelings when strolling around the traditional orchards and rich salt marshes of Venta Moinhos. This walking route provides one of the best ways to visit the Castro Marim Nature Reserve, a bird haven located on the estuary of Iberia’s ‘great river of the south‘.

The fourth longest in the Iberian Peninsula (830 km/515 mi), River Guadiana has long been a worthy natural and geostrategic asset both for Portugal and for Spain. Continuously occupied by a sizable human population since the Bronze Age, the frontier region around the old medieval castle of Castro Marim has seen Celts, Phoenicians, Greeks, Romans, Moors and Christians slowly develop a broad productive system based on the natural wealth provided by the plentiful ocean and the generous river.

In effect, part of the explanation why the Algarvian coastal waters are so bountiful lies in the fact that the region’s widespread salt marshes function as a large nursery for juvenile fish species with high commercial value. Here, bordering the most humid soils, there are long-established cultures based on classic Mediterranean food staples – like olive groves and carob tree orchards – in addition to significant stretches of grassland. 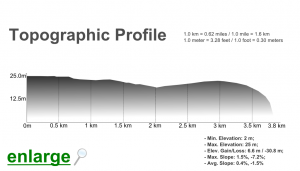 Such triad of differing habitats is precisely what we encounter at the start of the Venta Moinhos salt marsh trail, a location where the pervading topographic plainness is only slightly broken by the gentle rolling hills on the left-hand side, and by the presence of the white sail-like superstructure of Guadiana’s International Bridge. Bundled within a relatively small area, those diverse habitats (or, more accurately, “biotopes”) promoted the presence of almost two hundred different bird species, some of them largely absent from central and northern Europe. It is not uncommon to come across a distinctive marine specimen, like an Audouin’s Gull (Larus audouinii), and at the same time listen to the characteristic loud call of a Great Spotted Cuckoo (Clamator glandarius) perched on a lavish fig tree. In all probability, visitors will also observe Spoonbills (Platalea leucorodia) promenading a deserted saltpan.

And, by the way, it is not the warm breeze waggling the yellow long grass, it is instead a band of steppic Little Bustards (Tetrax tetrax) scrambling for cover after spotting an unsuspicious birdwatcher. A few hundred meters ahead there is a junction; here, you can turn right and follow the path leading to the Interpretation Centre (the Reserve’s headquarters), a site that benefits from a raised vantage point over the lagoons and wetlands located along the river’s margins. Return to the main trail, walk for another few dozen meters and then follow the double line of young maritime pines leading to the small whitewashed house on the hilltop; the true extension of the salt marsh will become apparent from this privileged location. However, if you want to take a closer look at the wetlands, make the way back to the aforementioned junction and then follow the route that passes under the bridge. The trail ends in the now redundant border control house. This is a small building that was used to dissuade the crossing of Portuguese and Spanish smugglers, a traditional ‘occupation’ that has fallen through the cracks of time. (See also Castro Marim Nature Reserve Birding Hotspot).

Venta Moinhos Salt Marsh Walking Route Map: check markers to get directions or open with Google Maps
FURTHER TIPS
If you are arriving by car, there is ample space to park your vehicle. It is in fact possible to drive all the way to the Interpretation Centre (open Monday-Thursday, 9:30-15:30); however, by doing that, you would miss a lot of the most interesting natural features of Venta Moinhos. There are good alternative trails radiating from the main trail: please check the routes on the map above, as those will afford excellent opportunities to observe the saltpans and marshy areas. On the way to the old border control house there is also a wooden bird observation hide, located just a few hundred meters south from the International Bridge. To access the bird hide, visitors must ask for the key at the Interpretation Centre. Enjoy!
PLANNING A VISIT TO CASTRO MARIM NATURE RESERVE?
Then you may also want to visit the several interesting places in Castro Marim. Besides its high quality beaches, like Praia Verde, the petite town itself has an interesting story to tell. During the Antiquity and the Middle Ages, the hill where the Castle now stands was located precisely at the mouth of the river. Such long-gone strategic setting attracted wave upon wave of different settlers throughout the ages, including Celtiberians, Phoenicians, Romans, Vandals and Moors (learn about Castro Marim attractions).