Search
A playground for surfers of all skill levels, the Algarve offers the warmest waters and the widest swell window in mainland Portugal. Surf beaches in the Algarve stretch all the way from Fuzeta in the southeast to Odeceixe in the west. However, the seven best spots are located in the Algarve’s southwest corner along the beautiful Vicentine Coast Natural Park. Let’s take a closer look.

The Best Surfing Spots in the Algarve

Nestled under the shade of dark cliffs, Arrifana offers two distinct spots: a fun beach break with hollow peaks (suitable for beginners) and a celebrated right point-break at the northern end of the beach (suitable only for experienced surfers). The beach break has a sandy bottom, making it safe for inexperienced surfers. At the northern point-break, though, waves can be fast, big and heavy, with shallow boils and barrel sections. Here, the take-off is critical as it will normally occur right in front of large rocks. This beach is somewhat more sheltered from northwestern winds than most others along the Vicentine Coast. As expected, Arrifana can get a bit crowded on a good day of swell – indeed, owing to its natural beauty and distinctive features, Arrifana is very popular among locals, tourists, and surf schools alike. This place has easy parking but non-residents can only park at the top of the hill.

Bordeira is a huge beach adorned with a striking headland and a small river on its southern side. Often uncrowded, Bordeira gets plenty of swell all year-round. Sometimes its waves are challenging even for experienced surfers, but beginners should also have good opportunities to surf its beach break throughout the seasons. On the southern end, Bordeira/Carrapateira is able to generate a left-hand point break that occasionally forms long barrels. Yet, because it ends in front of a cliff face surrounded by rocks, this point break is totally off-limits to beginners. For the most part, Bordeira has a sandy bottom (except on its southern end) but it can also be rippy and easily affected by the winds. Parking spaces are abundant; on the other hand, this beach has no toilet facilities. 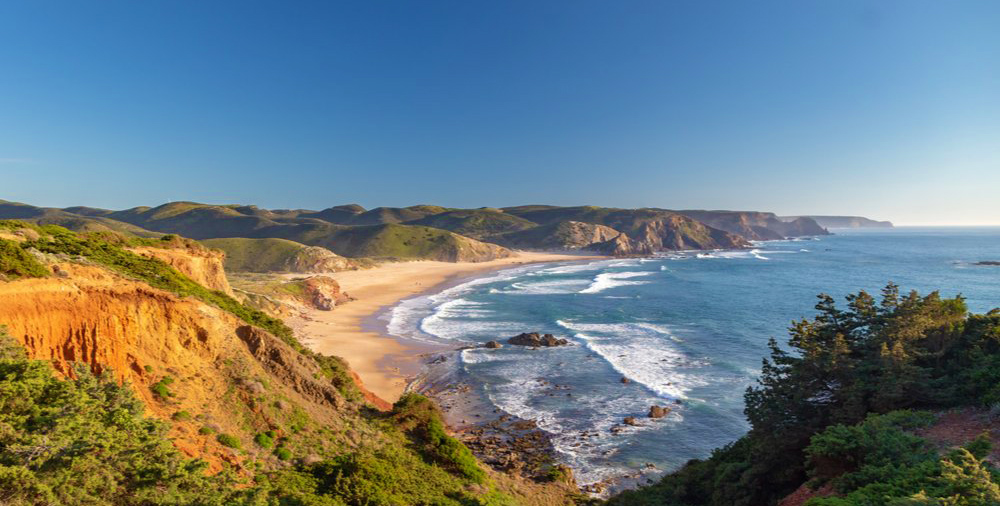 Located in one of the prettiest stretches of landscape on the west coast, Amado Beach catches a lot of swell and offers something for all skill levels. This right and left beach break with great atmosphere and no buildings is also relatively sheltered from the wind. Because of all this, you might have to share your waves with many other surfers and surf schools. However, once it gets a bit bigger, all the beginners soon clear off, leaving more than enough room for proficient surfers. Amado’s main hazards are the rocks hidden beneath the waves. This spot has a ample parking area on the top of the hills overlooking the beach. 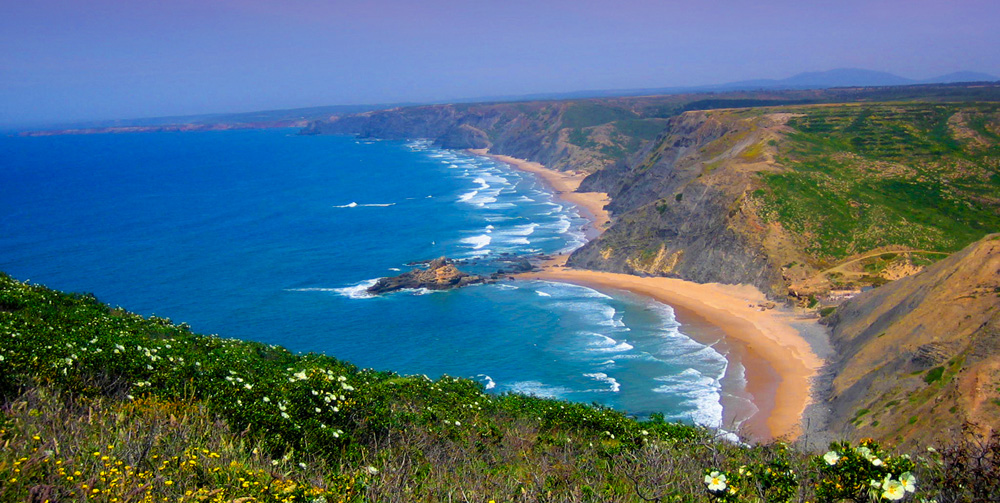 The main image at the top of this page is from Castelejo. Both Castelejo and Cordoama are gorgeous and somewhat off-the-beaten-track beaches that offer different levels of challenges depending on the prevailing swell and the strength of the current – in fact, these west-facing spots can be suitable for beginners but sometimes you’ll only find hardened pros riding their waves. Both very consistent beaches, they are covered by reefs, sandbars and hidden rocks across their full length. Before testing the waters, make sure that you know where the rocks are, and how the tide is behaving. They usually have plenty of swell, as well as plenty of room to park your car (or camper van). 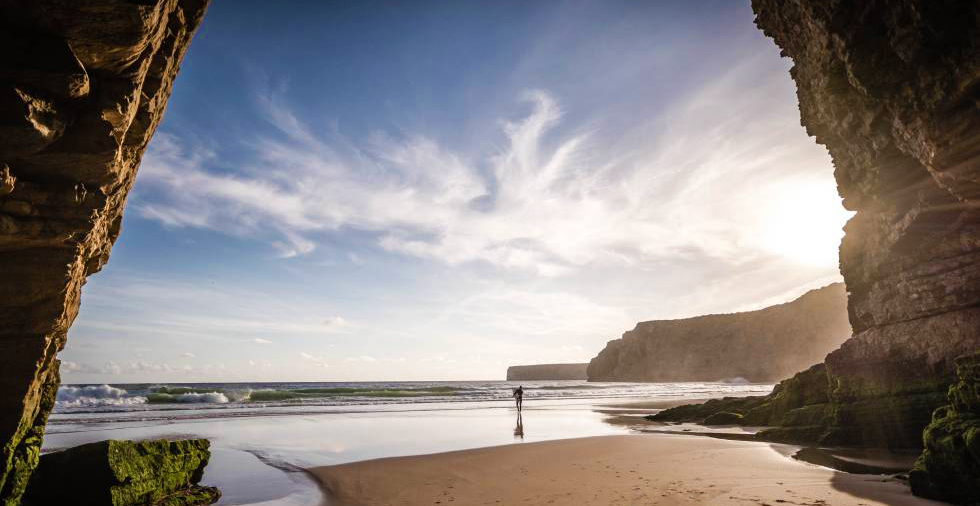 Just around the corner of famed Cape St. Vincent, Beliche is a very popular surfing spot that often produces world-class waves whenever a well-directed swell hits the jagged shoreline. A right and left beach break, Beliche is better suited for experienced surfers capable of taking off on hollow waves. These waves, which often converge to form a wedge, break on shallow water. To reach Beliche’s little bay (pictured above), you’ll have to negotiate a steep flight of steps. Also a beach break capable of delivering powerful waves, Tonel is conveniently located just outside the town of Sagres. Contrary to Beliche, Tonel offers gentler types of waves for beginners, particularly in summer. Still, surfers must be aware of the gnarly rocks lurking under the surface.

Found in the south coast, Zavial sometimes harbors a great righthander over its sand and rock bottom. Owing to its relatively sheltered situation, this beach requires a generous, well-oriented swell to show its teeth. Beginners beware, as Zavial can be much more challenging than it looks at first glance: the takeoff zone is narrow, the waves can be heavy, and the rocks are just about everywhere. Still, during summer, Zavial often produces easier waves with a southeast swell. Its waters are also warmer than the ones along the western coast. It is easy to find a space to park your car, even in summer. Image: A Terceira Dimensão

The Algarve is a year-round surfing destination. Nevertheless, winter and autumn are the best seasons for experienced surfers. Besides bringing with it the crowds – not much of a problem in the Vicentine Coast – the summer also suffers from long flat spells (but then again, such spells are not very common along the Vicentine Coast’s western side). Please note that, in addition to the beaches mentioned above, beginners will also find an abundance of spots with gentler waves throughout the whole region (such as Faro, Albufeira or Fuzeta). Enjoy!