Search
When shrouded in thick fog, Praia da Cordoama surely has a touch of the mystical. Located on Algarve’s western shore to the north of Cape St. Vincent, this is a windy place marked by the presence of stark cliffs that fall steeply to the pristine beach down below. Slightly off the beaten path, here you’ll appreciate big surf, big skies and big rocks. 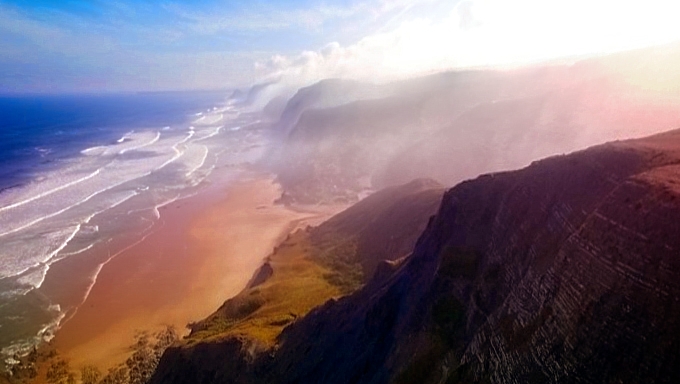 Running on top of some of the tallest cliffs and coastal plateaus in the Algarve, the very uneven loop trail affords dramatic views of the rugged landscape that characterizes this land. Along the way, you’ll have the chance to observe several species of rare or endemic plants, like the fragrant Camphor Thyme (Thymus camphoratus) or the Southwest Rockrose (Cistus palhinhae); in Autumn, the peaks and troughs also provide much needed resting spaces to migratory birds such as to Tawny Pipits or to endangered Ortolan Buntings. Between September and October, the skies above are crossed by larger species like Booted and Short-toed Eagles.

A haven for surfers, Praia da Cordoama is a large beach populated by dark rocks at low tide. One would think that some of these surfers are engaging in risky behaviours by challenging Cordoama’s sharp rocks and powerful breakers; however, surfing is way less dangerous than catching goose barnacles, a local delicacy that can only be harvested on the exact frontier between the crashing waves and the jagged cliff faces. Cordoama is often frequented by goose barnacle catchers, a hardened kind of men that routinely engage in what is considered the most hazardous job in Portugal.

With their lives literally hanging by a thread (they use ropes to climb down the cliffs), these 80 or so licensed catchers are relentlessly pummelled by the incoming waves; being crushed against the rocks or being swept out to the sea is part of their lives and part of their deaths. However, ask them if they would rather do something else instead for a living, and all you’ll get is a resounding ‘no’.

Due to its strong waves and fast currents, Cordoama is not the best location to go swimming with children. In winter, a small freshwater stream cuts across the sand before merging with the sea – when flowing, this stream is a magnet for birds like the Dunlin, the Sanderling and the Kentish Plover. Both the trail and the beach can be reached by car via a tarmac road, but parking is oftentimes difficult during Summer. July and August are usually the busiest months. In Summer, try to arrive early in the day to secure a parking place. There’s a small seasonal restaurant in Cordoama, but not much more apart from raw nature. Please see also Castelejo Trail. Enjoy!